Wrapped belts could be considered the standard v-belt. The term wrapped comes from fabric that covers the internals of the belt, giving it a very uniform look and feel, as well as reasonably quiet operating characteristics.

A. The features of wrapped belt

The purpose of the wrap is two-fold. The fabric provides abrasion resistance, which makes the belt more durable. The contact between the belt and sheave is constant and can occur at very high speeds.


This extra protection against contamination and wear of both belt and sheave, allows the belt to operate longer before it becomes too worn to transmit the required power properly.

Another benefit, which can be critically important in the applications that require it, is belt slip. While a v-belt slipping within a sheave can seem counter-intuitive, it can prevent significant damage.


When a torque spike occurs, or a sudden change in the drive speed causes the belt drive to respond in kind, a wrapped belt will slip more easily than a raw-edge.


Most of the time, the belt will snap before transmitting power back into the gearbox or motor, so the belt’s ability to slip is a safety factor.


Lastly, the fabric wrapping has high oil resistance. Raw edge belts have a possibility of becoming clogged with contaminants and absorbing moisture. This will lead to swelling of the belt rubber and cause breakage. A. The features of cogged belts

Cogged belts (Raw-edge belts) have cogs on the bottom section and forego the fabric wrapping on the outside of the belt, leaving the interior materials exposed on the sides.


The belt, provided with a higher coefficient of friction, can now better grip the sheaves. This increased grip means that the raw-edged belt transmits more horsepower at higher speeds, as much as a 30% increase in some cases. 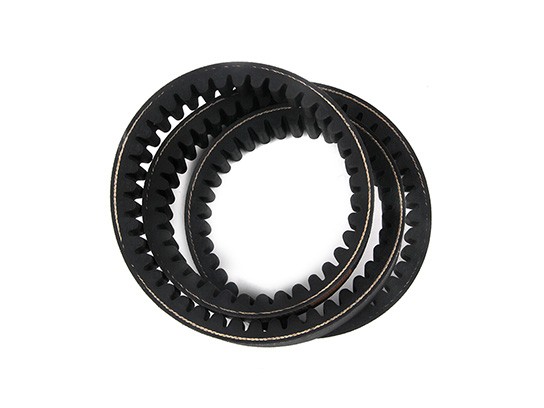 Because of the inclusion of the cogs, are better able to wrap around smaller sheaves. These belts also run cooler at higher speeds and generally have better temperature resistance.

Pre: How to measure the v belt length?
Next: How to choose a high-quality agricultural V-belt?